Referendum Result – 95% in favour of the plan 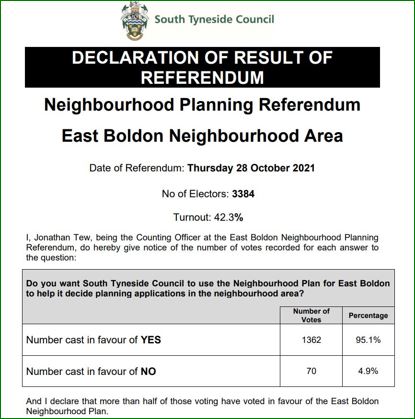 Our Chair, Kirstin Richardson made the following statement on the announcement of the result:

“This is a wonderful result for East Boldon. The Neighbourhood Plan is built on the wishes of East Boldon residents.The fact that the Plan has now been endorsed in this historic referendum will mean that future development must respect those wishes; it means that the identity and uniqueness of the village will be better safeguarded; and it means that our green spaces that are so much valued today will be protected for our children and grandchildren.
We are very grateful to East Boldon residents for coming out to vote and giving us their support. It has always been our intention that the East Boldon Neighbourhood Plan should have the voice of the East Boldon Community at its heart.
East Boldon Forum is committed to work for its community, and the village we call home. Our community has spoken and the majority who voted have told us that they support the work we are doing. This referendum result gives us a convincing mandate to take forward the policies and community actions contained in the Neighbourhood Plan.”

The result will be considered at the Council’s Cabinet meeting on 1 December 2021 where it is expected the plan will pass the final legal stage and be “made” meaning that it comes into force.