Development of a Neighbourhood Plan 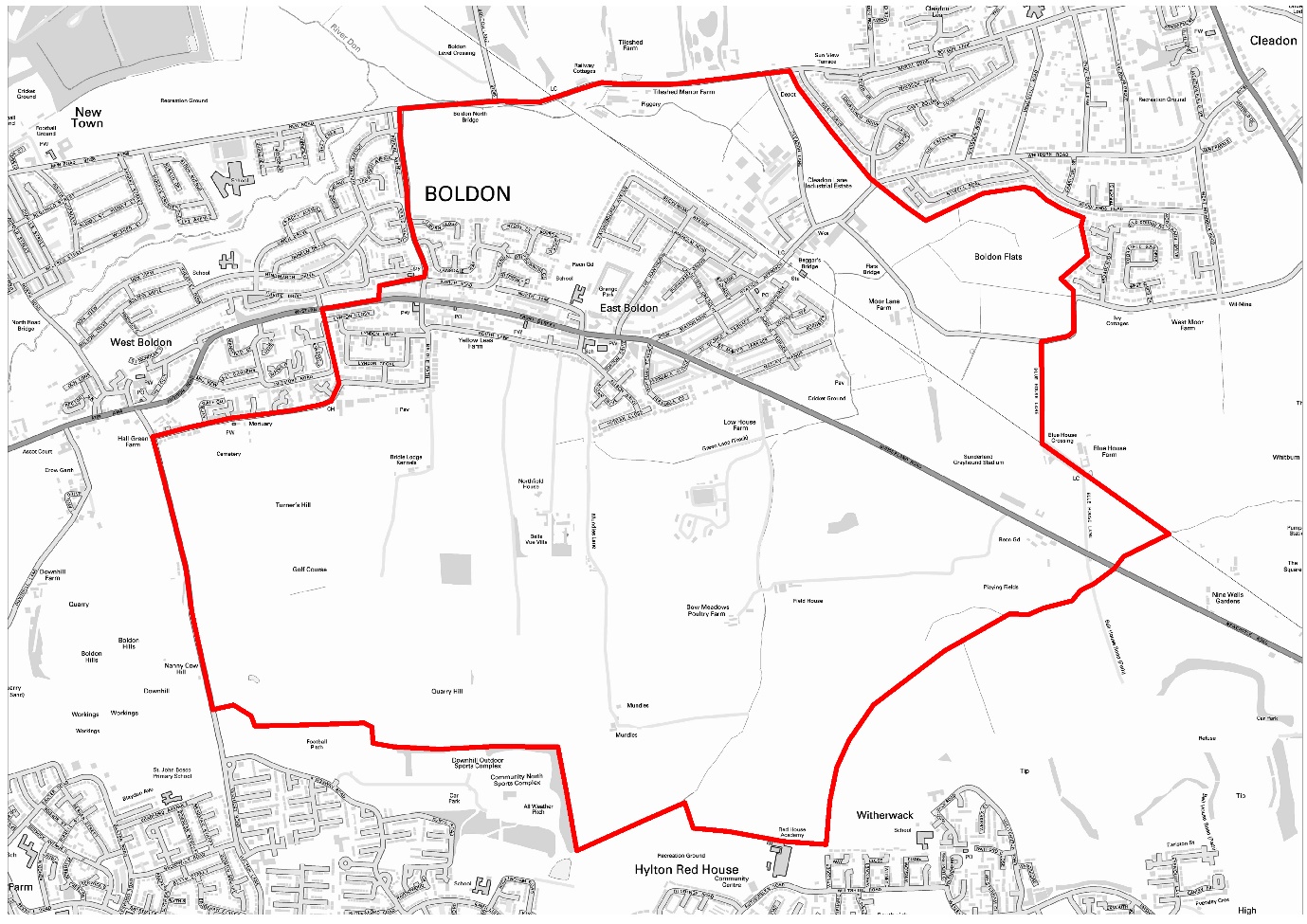 There is a great sense of ‘community’ in East Boldon and although there has been expansion over the years, a ‘village feel’ still predominates.

The village is served by a Metro station and bus routes to other areas including Sunderland and South Shields. It has a diverse range of house types, from Victorian and Edwardian to modern housing, but hardly any social housing. The old part of the village, which dates back to the seventeenth century, retains many interesting examples of architecture and is protected by Conservation Area status.

There are three churches and three pubs. A long-established industrial site is in close proximity to the village, but is separated from the main residential area by the Metro/Rail line. There is a small range of shops near to the Metro station including a chemist and two small supermarkets, with additional shops in Langholm Road and Front Street. The village retains an infant and junior school, both within walkable distance for most residents. A nursery school shares the junior school site.

Following a community consultation event in 2017, an application was made to South Tyneside Council to establish a Neighbourhood Forum for East Boldon. Formal recognition followed in January 2018. Details are available on the Council’s Website.

The Forum has a membership of 235 residents and meets monthly at the Scout Hut next to the Grey Horse. Meetings are open to the whole of the community and the venue is accessible to all. The Neighbourhood Plan Area has a population of just over 5,000 and includes around 1,800 households. It has a golf course, cricket ground, Boldon Flats bird sanctuary, and abuts swathes of land currently designated as Green Belt. The Plan Area also boasts a tennis club (dating back to 1886) and an archery club.

The Plan area is located in the Borough of South Tyneside, within the Cleadon and East Boldon Ward and a small part of the Boldon Colliery Ward. Its southern boundary adjoins Sunderland, a neighbouring local authority area. It contains large areas of Green Belt land, a network of watercourses and habitat rich in bio diversity.

As well as the statutory Green Belt, the Plan Area includes many important ‘Green Spaces’ that have major benefits for the Neighbourhood Plan area which the Forum feels it is particularly important to protect. These areas include the Junior School and Nursery School grounds, Boker Lane footpath, Mundles Lane bridleway, Victoria allotments and land adjacent to St. George’s Church and the War memorial.

Community Consultation – What You Told Us

Since its establishment, members of the Forum have been working to have a conversation with the wider community, including businesses, to ensure that the views of all stakeholders are represented in the Neighbourhood Plan.

Using the feedback from its first community consultation event in 2017, East Boldon Neighbourhood Forum identified a number of draft objectives which best summarised the aspirations and concerns of the people who work and live in the area.

Objective 2 – The Built and Historic Environment ‘Ensure new development makes a positive contribution to a safe and well-designed built environment and that it respects the historic environment of the Neighbourhood Plan area.’

Objective 4 – The Local Economy ‘Support the sustainable creation and protection of employment opportunities in the Neighbourhood Plan area, and the vitality of the Village and Local Centre.’

Objective 5 – Housing ‘Create and maintain a balanced and sustainable community by providing a positive framework that recognises the different types of homes that all current and future residents of the Neighbourhood Plan area need.’

Objective 6 – Community Wellbeing ‘Contribute to community wellbeing by ensuring that the Neighbourhood Plan area’s community, especially its older and younger people, have access to the services and facilities they need.’

Objective 7 – Flooding and Sustainable Drainage ‘Reduce the causes and risks of flooding in the Neighbourhood Plan area.’

Objective 8 – Transport and Movement ‘Manage the transport network of the Neighbourhood Plan area to be safer, more efficient and more environmentally friendly for all users, while ensuring adequate parking is available to meet the needs of residents, visitors and businesses.’

These objectives were used as the basis for a further consultation event in June 2018 and given overwhelming endorsement by those who attended.

More detailed consultation followed in March and June 2019, completing a sequence of work which provides a good understanding of what those people living and working in the Forum Area wish to see covered by the Neighbourhood Plan.

Those who have taken part in the consultations to date highlighted several concerns including:

In addition to holding consultation events, an audit of historic and environmental assets is well underway and mapping of infrastructure and transport routes is complete. Business and housing surveys have been undertaken. Bi-monthly meetings with the Planning Authority continue and the Forum has engaged with Locality, a national membership network for community organisations, in order to access professional help.

At the beginning of 2019 the Forum appointed a Planning Consultant, Jo-Anne Garrick, to help with the preparation of the Neighbourhood Plan. A housing needs assessment was commissioned.

The Forum has now embarked on the process of preparing a Design Code, which it sees as essential to ensure any future development meets the needs of the community.

South Tyneside Council is working towards the publication of a new Local Plan, and in 2016 consulted on a Strategic Land Review. This highlighted sites in and around East Boldon, mainly in land currently allocated as Green Belt, which the Council suggests may be suitable for future development.

The Strategic Land Review raised a ground swell of local opposition to large-scale development, and to any further erosion of the Green Belt. This opposition grew with the publication of the Council’s Draft Local Plan for the period 2021-2036 which was published in summer 2019 and which provided a clearer understanding of the proposed scale of development in the Forum Area.

Further details of the Council’s Draft Local Plan can be found at:

Please review the Forum’s full response to the Council.

As a result of the Coronavirus Pandemic the Forum had to suspend its monthly meetings in the Scout Hut but the Executive has continued to meet digitally and keep the Forum membership updated with emails and newsletters.

The Forum has completed the preparation of the Draft Neighbourhood Plan which has been a significant piece of work involving the gathering of background information across the eight policy areas covered by the Forum’s objectives. This evidence has to be robust in order to meet the standards required to pass a formal examination by an independent examiner appointed by South Tyneside Council. One of the basic conditions that will be tested by the independent examiner is whether the making of the Neighbourhood Plan is compatible with relevant legal European and UK obligations, including Strategic Environmental Assessment (SEA) and Habitat Regulation Assessment (HRA).

South Tyneside Council has carried out a “screening exercise” to look at the proposals in the Draft Neighbourhood Plan to see if significant effects are likely, necessitating an SEA or HRA. The Council have recently notified the Forum that neither an SEA nor an HRA are necessary. This clears the way for the Forum to share the Draft Neighbourhood Plan with East Boldon residents and other consultees who will have the opportunity to comment on the Forum’s proposals.

The Forum will start the consultation in October 2020. All households will receive a newsletter giving full details of the consultation process, where the documents can be viewed, and how you can respond. This will be your opportunity to have a say in your village’s future and an opportunity to comment on the Draft Neighbourhood Plan before it is finalised and submitted to South Tyneside Council.