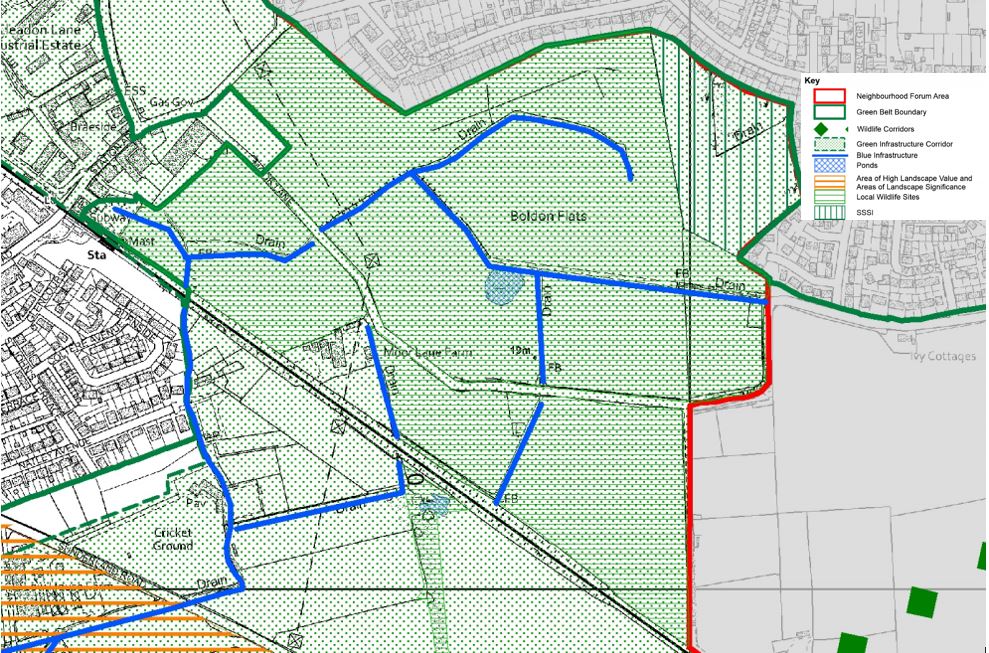 What is a Community Action ?
The East Boldon Neighbourhood Plan which the community approved in October 2021 included a number of Community Actions setting out potential improvements across the village.

What does that mean for the Flats ?
In simple terms, NOTHING, the Forum has no powers to make any changes to the site.

However, to address part of Community Action 2, the Forum has asked the Council to look into providing greater protection for the animals and plants on the flats.

Why is “Boldon Flats” Special ?
Mudflats and wetlands are nationally rare habitats that are vanishing rapidly across the UK and Boldon Flats are an excellent example providing a number of different habitats which support a variety of wildlife.

Currently, part of the flats is designated as a “Site of Special Scientific Interest (SSSI)” while other areas are “Local Wildlife Sites (LWS)”. Forum members believe that additional protections might be provided if the site was also designated as a “Local Nature Reserve (LNR)”. Only the Council can amend the designation.

Here is a map of the site.

Why is the Forum suggesting a change in designation at Boldon Flats ?
Climate change and urban fringe development are causing sites such as Boldon Flats to come under pressures never experienced in their 10,000 year post glacial history.

Sandpiper View has already replaced the Gordon Durham site and there are at least 2 potential future developments within 500 metres of the Flats: Mayflower Glass and Cleadon Lane Industrial Estate .

What is the process ?
In order to provide additional protection for Boldon Flats and in response to concerns raised by Cleadon and East Boldon residents, the Forum has asked the Council consider giving the Flats extra protection by designating them as a Local Nature Reserve. It is up to the Council to take the matter further.

What’s the difference between SSI, LNR and LWS ?

A SSSI is a Site of Special Scientific Interest designated under the Wildlife and Countryside Act 1981. It is a national designation and is administered by Natural England.

A Local Nature Reserve (LNR) is declared by a local authority and they must control the land. It is a commitment by a Council to manage the site positively to care for and protect its natural features.

A Local Wildlife Site (LWS)  is an area of substantive nature conservation value and provides a level of protection under the planning system. Any proposed development at or near the site must be assessed against the ecological interest and given due weight when determining a planning application.

LWS designation in itself does not protect a site from inappropriate management.

LNR designation, by contrast, is effectively a commitment by the Local Authority to manage the site positively for its ecological interest .

Byelaws can be created to stop people damaging a LNR.

All existing LNRs in South Tyneside are also designated as LWS as the designations do different things. So LNR status would be an addition, not a substitution.

I’ve heard there are plans to develop the site, are these true ?

There is NO TRUTH in any rumours that there are plans to:

Create footpaths across the site;

Create car parks on the site;

Build hides around the site;

Build a shop or provide toilet facilities on the site.